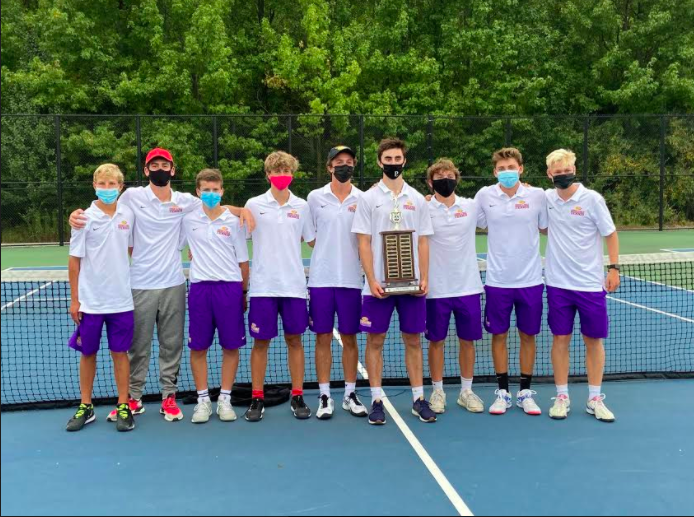 The Guerin Catholic boys’ tennis team concluded to the 2020 campaign ranked #13 in the final IHSTECA coaches’ poll. The team finished with a regular season record of 14-4, highlighted by wins over #12 Fishers, #15 Cathedral, and #18 Brebeuf. They also picked up a program first ever victory over perennial state power Park Tudor. Their only regular season losses were to #1 Carmel, #2 North Central, #9 HSE, and #18 Westfield. They avenged the Westfield loss with a first-round sectional victory 4-1 over the Shamrocks before falling to eventual state champion Carmel, 4-1 in the sectional final.

When asked about the season, third-year head coach Chris Sciaudone replied, “2020 was a season full of challenges, not just for our team but for many teams due to circumstances beyond our control. The boys and our coaching staff are very grateful to our school administration and our athletic department at Guerin Catholic for “finding a way” during tough times. It was a breakthrough season for our team and our coaching staff is very proud of what the boys were able to accomplish on the court. Winning the Circle City Conference is always at the top of our list of goals. But doing so with a lineup that seemed like a game of musical chairs at times was a great accomplishment. Most importantly, our young men represented Guerin Catholic well all season long. Making Academic All State as a team is a great achievement, especially for a team with 47 players. ”

Third-year head coach Chris Sciaudone often found himself scrambling to assemble a line-up, as the numerous quarantines amidst the COVID-19 pandemic played havoc with the roster from week to week. In all, 12 different players saw varsity action during the course of the 2020 campaign. In all 47 boys competed for the Golden Eagles in 2020, including 11 freshmen.

The Golden Eagles claimed their first Circle City Conference boys’ tennis title since 2017 in dominating fashion, sweeping all five conference dual team matches. Their record in individual matches within the conference was 23-2.

They also claimed victories in all five JV conference matches, a first in school history. The junior varsity team finished the season with a record of 11-6, including winning the Peru JV Invite.

The team claimed the THN Invite, defeating Terre Haute North, Southport, and Bishop Chatard in the process by a combined score of 14-1. Shining brightly was John Tiplick, sliding into a varsity singles spot for Cole Metzger who was unavailable, and going 3-0 on the day. The Golden Eagles also claimed the Homestead Invite over #3 Munster, #5 Homestead, Concord, Mississinewa, Belmont, Northridge, and Leo. Cole Metzger was the individual champion at #1 singles and Ty Harrington the individual champion at #3 singles for the Invite.

By winning both his sectional matches, senior Cole Metzger became the first Guerin Catholic player to ever advance in the state singles tournament. He picked up wins over players from Logansport, Lake Central, and Chesterton on his way to winning the individual regional championship and advancing to the IHSAA State Finals. Cole was named first team All-District #6, and first team All-State.

“Cole cemented himself as possibly the finest player in our school’s history. Considering his family tree, that’s a tall order. Cole was a great leader for our team both on and off the court and he will be missed as will our other 16 senior players,” said Coach Sciaudone.

As a team, the Golden Eagles were named Academic All-State, with a team GPA in excess of 3.67. Quite an achievement considering the sizeable roster!

“We are excited to see our younger players return after working hard this coming offseason. The future for our program is very bright,” said Coach Sciaudone.