“Promoting education-based athletics in Indiana.” Summer vacation is here. What are you going to do in the next three months to get yourself prepared for next season? Remember, athletes are made in the summer. While summer is also a time to have fun, I caution you about taking shortcuts in your workouts. Once you stop 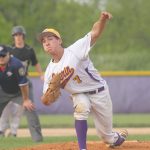 The Golden Eagles advanced to the Sectional Championship and will play the Brebeuf Braves on Monday @Brebeuf @3pm. In the semi-final, GCHS was able to hold off Mt. Vernon 4-3 in large part to the combined effort of seniors Johnmichael Augustinovicz and Mark Boylan on the bump picking up the win and the save respectively.

Congratulations to junior Ali Nelson on her verbal commitment to IUPUI to continue her playing career after her time here at GCHS! Ali is a two year letter winner and starter for the Golden Eagles. She has been recognized with ISCA 1st Team All-District and ICGSA 1st Team All-State honors the past couple of years.

At the recent Guerin Catholic Athletic Award’s banquet, senior Hannah Mattingly was named the GCHS 2013 Female Athlete of the Year! Hannah has been a four year letter winner for the Golden Eagles. Her versatility in her time representing GCWS has seen her play outside back, center back, defensive mid, and center mid. She is

At the recent GCHS Athletic Award’s Banquet, the Golden Eagle and St. Thoedore Guerin Awards were given. Receiving these awards for women’s soccer were: GOLDEN EAGLE AWARD: Meg Nowak (’14) ST. THEDORE GUERIN AWARD: Sam Pauley (’13) To Sam, congratulations on four great years as a Golden Eagle! Your work ethic, versatility, and leadership will

Golden Eagles News · May 20 Male Athlete of the Year!

Multiple Teams · May 20 Female Athlete of the Year!

Congratulations to all of our Golden Eagle and St. Theodore Guerin Athletic Award winners. click Sports Awards to see the winners. We are so proud of all of our Athletes! CONGRATULATIONS!

“Promoting education-based athletics in Indiana.” I know it’s not fair to compare professional athletes with those in high school, but the story line here shows how quickly management forgets about yesterday. Last baseball season pitcher Philip Humber threw the 21st perfect game in baseball history, an unbelievable accomplishment. Last week he was released by the